Threats of Failure on 8-year-old Shoulders

You know those days when everything thrown at you comes with an “or else” attached to it?  The days when you physically clasp the palms of your hands to your head and squeeze? Sales reps, you get this, right? Public service workers, what about you? Restaurant wait staff? Can I get a shout out from teachers? What about corporate administrative assistants? Parents, too, right? We all have those days, don’t we?

Now, imagine that you’re eight years old and every day at school feels that way. You see, we’ve entered the testing season, and for many little boys and girls, it marks the beginning of a decline in learning and the birth of a strong dislike for school.

It is during this season that many parents have to deal with children who can’t fall asleep at night, who cry through breakfast every morning, and have to be stripped from the car or pushed onto the bus each day. Why? Because eight-year-olds can’t handle the pressure of high-stakes classrooms any more than they can withstand the g-force of some amusement park rides. Their bodies simply can’t endure it. (At least theme parks seem to get this and post signs in front of rides inappropriate for small children.)

So maybe the answer lies in convincing your child each day that “doing his best” is all that matters. Before you attempt that, however, you might want to consider the climate in high-stakes classrooms, especially the ones in districts where standardized testing directs policy.

True, but nevertheless, she is extremely important in the grand scheme of things, beginning with her role in making sure her school meets AYP (the measurement of growth required to maintain federal funding for at-risk students). And because it is quite common for a school to miss AYP by one student, every single student matters, and your child not passing the test can affect everything –

Your child doesn’t pass the test. The school loses AYP funding. The teacher gets a bad evaluation. Principals get admonished by superintendents. Superintendents lose the trustees’ backing. The school board considers replacing all aforementioned employees by not renewing their contracts. Trustees worry about their next election. The district’s rating declines as county, regional, state, and national standings follow suit. 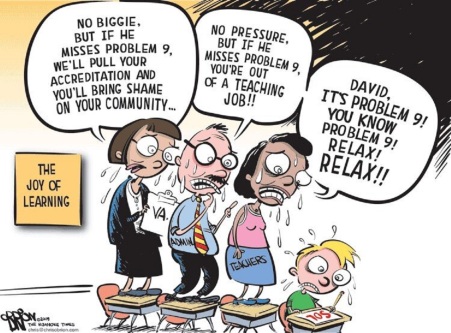 While your child probably can’t delineate these intertwining parts, he or she can certainly feel the pressure resulting from such a system.

A child acting in mischief is no longer just a distraction needing redirection; he is a threat to the livelihood of the teacher and of everyone in the system. Family-time absences at the elementary level cannot be excused; loss of instructional time threatens the school and could lead to the vicious cycle of loss described above. Action-oriented learning cannot be the room’s leading method; test-taking strategies and stamina must be developed to stave off the threat of student failures.

In short, unless your child passes the required tests, he is a threat to everyone in this high-stakes testing system. This doesn’t mean his teacher will treat him hatefully, but it does mean he will probably be treated with urgency, and urgency, when it is consistently applied, can be utterly exhausting and stressful – especially to an eight-year-old.

It is difficult to describe this manner of instruction as anything other than an egregious immorality. But what are we to do? High-stakes testing is the law of the land.

First, what we shouldn’t do is assume our schools and teachers support this mode of learning. For the vast majority, they are simply trying to survive in the system our politicians have built for us. What we should do, on the other hand, is contact our elected officials and demand that they overhaul these laws that fuel such a detrimental system, namely anything linked to No Child Left Behind or Race to the Top. It is high time that they understand that the threat of failure now rests on their shoulders and not upon the shoulders of our eight-year-olds. It is high time that they understand that their job depends upon their ability to do this job.

The opinions published here are strictly my own and do not represent those of my employer or any other entity.