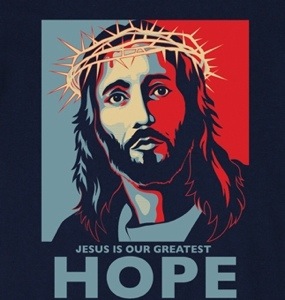 Last week, something happened I never thought I would see. The Rev. Billy Graham stepped into the political realm and virtually endorsed a presidential candidate. This week he is encouraging us through a series of ads to “vote for biblical values,” and as a Christian, I couldn’t agree with him more. There’s only one problem. Which biblical values should we vote for? Red biblical values or the blue ones? You see, it’s not just the states we’ve divided into team colors.

In the red camp, we have Christians who believe we should vote according to the verses in the Bible dealing with life in the womb and marriage between a man and a woman. For them, once you discern which candidate supports the right view of these issues, decision time is over. You vote Republican.

In the blue camp, however, there are Christians who believe we should vote according to the verses in scripture dealing with our obligation toward the poor and downtrodden and the sacred responsibility of caring for God’s creation. For these believers, the choice is also a clear one. You vote Democrat.

Voting biblical values. It’s really not that simple, is it?

What is simple, however, is that when we assume real Christians vote a certain way and publicly profess that to be so, we hurt people we love. Here lies the tragedy, the real downfall that should be feared by all Christians. If we walk away from this election with either man in the Oval Office, the cause of Christ will live on in you and in me, but not if we unknowingly destroy the love we have for one another. Scripture is very clear about that. They shall know we are Christians how? By our love for one another.

Therefore, before making that comment about real Christians voting a certain way, remember that your words may very well damage the love you share with other Christians, loved ones who honestly feel led to vote according to another list of biblical values or another philosophy as to which scriptural guidelines should be yielded to government oversight.

We must be so careful, so full of care, because losing an election is one thing, but losing our love for one another is just simply too high a price to pay for any political party or candidate. So, go ahead and speak your political convictions, but please, please go the extra mile and make sure you don’t forsake the greatest biblical value of all: love God, love people.

« What Do We Have to Lose?
Have We Kicked God Out of Our Schools? »

The opinions published here are strictly my own and do not represent those of my employer or any other entity.